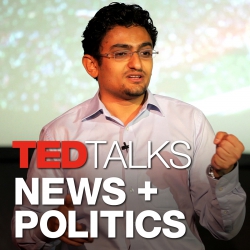 Seeing the world beyond news headlines: politicians, journalists and researchers share their insights onstage at the TED conference, TEDx events and partner events around the world. You can also download these and many other videos free on TED.com, with an interactive English transcript and subtitles in up to 80 languages. TED is a nonprofit devoted to Ideas Worth Spreading.

a month ago NaN minutes

The "broken" US political system is actually working exactly as designed, says business leader and a

a month ago NaN minutes

How to have constructive conversations | Julia Dhar

"We need to figure out how we go into conversations not looking for the victory, but the progress,"

How compassion could save your strained relationships | Betty Hart

When personal relationships and ideological differences collide, the result can lead to strained rel

3 ways to upgrade democracy for the 21st century | Max Rashbrooke

A historic number of Latinx voters participated in the 2020 US presidential election, including a re

What if a US presidential candidate refuses to concede after an election? | Van Jones

If the 2020 US presidential election is close, the race could drag on in the courts and halls of Con

With the ambitious goal of becoming the first carbon-neutral continent by 2050, the European Union h

Social psychologist Dannagal G. Young breaks down the link between our psychology and politics, show

What drives someone to commit politically motivated violence? The unsettling answer lies in daily ha