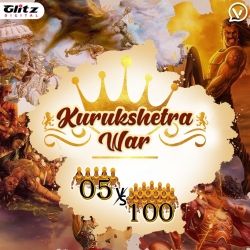 The Kurukshetra War, also called the Mahabharata War, is a war described in the Indian epic poem Mahābhārata. The conflict arose from a dynastic succession struggle between two groups of cousins, the Kauravas and Pandavas, for the throne of Hastinapura.

The Kurukshetra War, also called the Mahabharata War, is a war described in the Indian epic poem

Kauravas and Pandavas array and fight fiercely against each other. Krishna gifts mankind, the Bha

The Kalinga army is destroyed by Bhima.Kalinga King and his sons are also killed.Pandavas gain a

In an interesting twist,Krishna suddenly takes his Sudarshana Chakra to charge at Bhishma.

Bhima's valour shines bright on the battlefield.  He kills eight brothers of Duryodhana.

Kaurava Guru and their Generalissimo Dronacharya, engages in a fierce duel with Satyaki. Arjuna t

A day marked by remarkable slaughters. On both sides the formations are broken.  Bhima manag

Drona slays Sankha, the son of King Virata.  The day ends with victory for the Kauravas .

Duryodhana engages the Rakshasa fighter Alamvusha to kill Iravan, son of Arjuna, but the Rakshasa

Pitamaha Bhishma wreaks havoc on the Pandava troops.  Yudhistra visits Bhishma at night to u